Wavelength Dispersive X-ray Spectrometry (WDS) uses the wavelength of X-rays emitted from a sample to detect and quantify specific elements. Upon electron bombardment from the primary beam, elements in the sample undergo fluorescence and emit secondary X-rays whose wavelength is characteristic of the emitting element. WDS can quantify the concentration of all elements on the periodic table heavier than Be (Z>4). By tuning the WDS spectrometers to a specific wavelength corresponding to a particular element, X-rays emitted from the sample are diffracted by synthetic diffraction crystals according to Bragg’s Law and counted with a gas-flow proportional detector. X-ray counts emitted from an unknown sample are compared to X-ray counts from a material of known chemical composition (the “standard”), which enables a quantitative determination of elemental concentration. Concentration can thus be determined from the activation volume of a single analysis spot, or X-rays collected when the beam is rastered across an area of the sample can be spatially reconstructed to generate a WDS X-ray map for a chosen element.

Electron Backscatter Diffraction (EBSD) is a microstructural and crystallographic characterization technique used to reconstruct the orientation and symmetry of crystalline materials. Electrons exit the sample surface according to Bragg diffraction corresponding to periodic lattice planes in the material. EBSD band patterns correspond to unique crystal symmetry and structure and can be used to determine the orientation of a crystal lattice in space. Collection and reconstruction of EBSD band patterns are used to study crystalline/polycrystalline materials and provide information about the crystal structure, absolute orientation, phase identification, or internal strain in the material.

Energy Dispersive X-ray Spectrometry (EDS) uses the energy of X-rays emitted from a sample to identify elements in the analyzed material. EDS provides a chemical spectrum corresponding to all elements (heavier than Be) present and can be used to semi-quantitatively determine the chemical composition of the material. EDS provides a simple, rapid determination of chemical composition from micron-scale regions of the sample surface and EDS spectra can be collected and compiled into an image by rastering the electron beam across the sample surface.

Secondary Electron Microscopy uses the emission of inelastically-scattered electrons from the outer surface of the sample to reconstruct the struture and topography of the analyzed region. Secondary Electron Images (SEI) are generated by measuring secondary electrons and reconstructing them to their original position to create a 3-dimensional image of the sample surface.

Back-Scattered Electron Microscopy analyzes electrons that are elastically-scattered from the sample surface to reconstruct the relative atomic composition of the analyzed region. The frequency of inelastic collisions is a function of electronic density and therefore atomic number, enabling Backscattered Electron Images (BSE) to provide information about the mean atomic number of different regions of the sample surface. BSE images show phase contrast and in some cases orientation about adjacent phases in the material and are useful for guiding quantitative analysis of different phases in the sample.

Cathodoluminescence (CL) is the analysis of light emitted from the sample upon electron bombardment. As electrons from the prmary beam induce electron-orbital transitions in the analyzed region, electromagnetic radiation in the form of visible light is emitted and can be amplified and collected as an image. CL intensity is a function of the atomic composition, band structure, and defect chemistry of the sample. CL images can be generated by collecting all light emitted from the sample or by filtering specific wavelengths that can be linked to certain activator species. 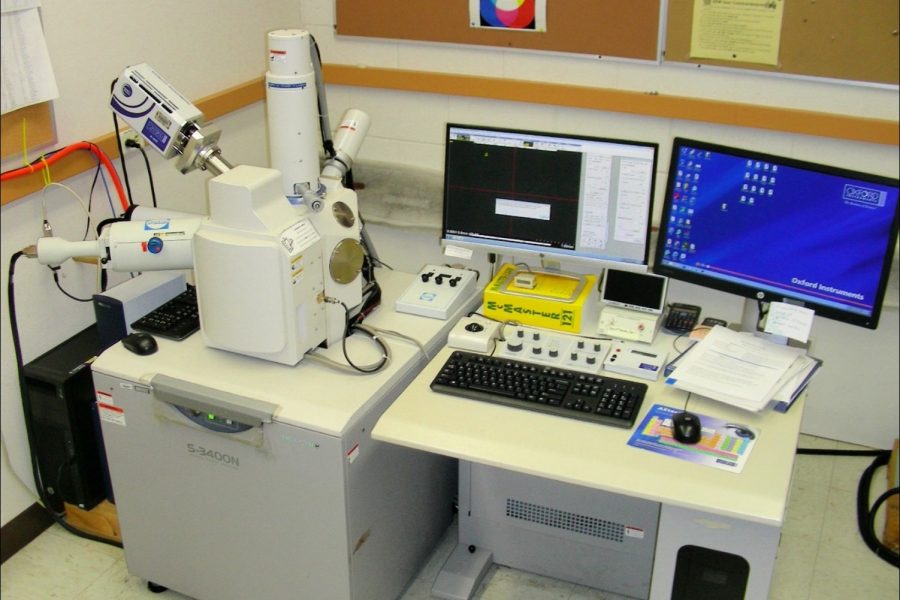 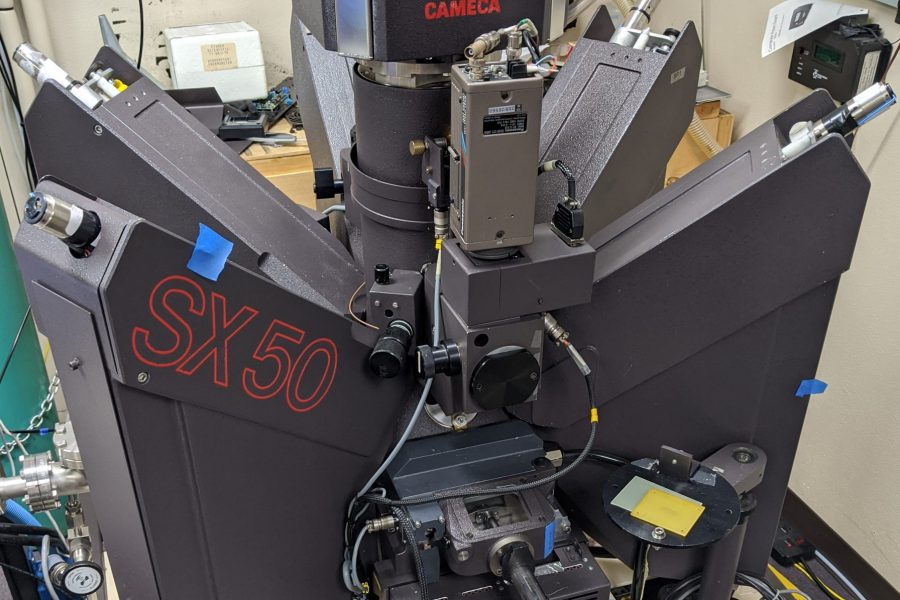 We have high-vacuum coating machines for applying specific thicknesses of various coating materials to ensure samples are electrically conductive. 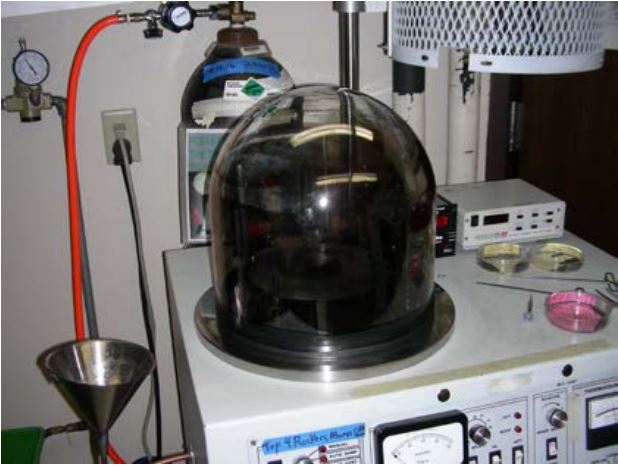 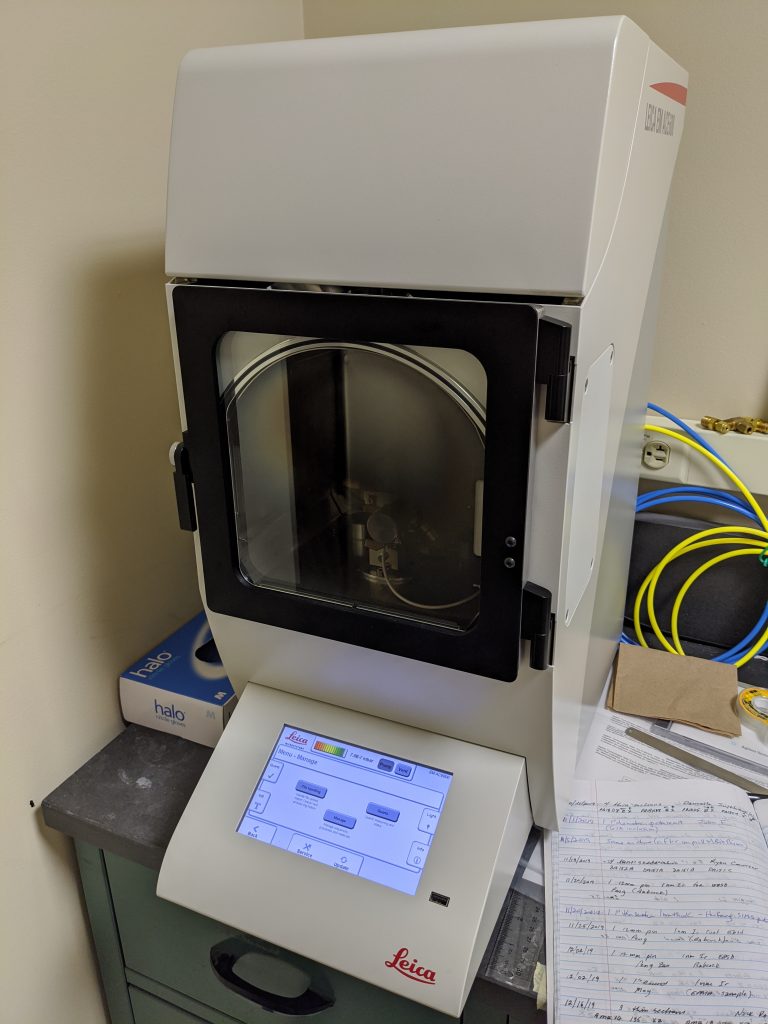 Our labs house an assortment of light microscopes for viewing samples in preparation for microbeam analysis. 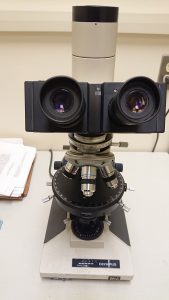 We have an array of polishing, sectioning, and mounting equipment for preparing samples.

We use vacuum-furnaces, hot-plates, and fume hoods for desiccation and calcination of samples prior to analysis.

We have equipment for vacuum filtration for extraction of fine particulates from fluid media for selection and preparation.